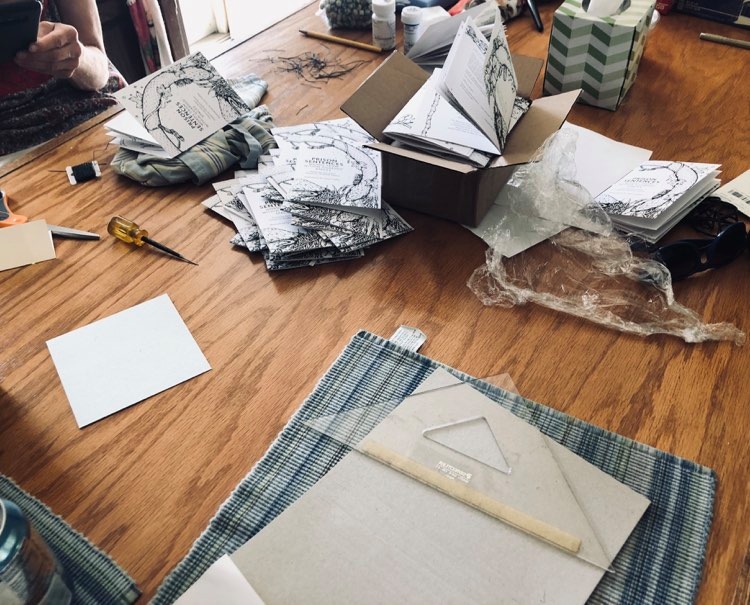 Some trace the zine’s origin to Thomas Paine’s Common Sense or the chief magazine of the Transcendentalists, The Dial, brought to life because no one else would publish their ideas. And the zine has that air about it, seemingly breathed into its very form—the air of humble defiance: fresh, feisty, and transcendent. All the same, the bigger beef of the zine comes later, from that other crowd of literary weirdos—the science fiction writers. Frustrated by the space tales of the 1920s and 30s in Amazing Stories, America’s first sci-fi magazine, readers started writing to each other rather than to the magazine, lifting personal addresses from the letter column. To combat their defiant scrutiny of the magazine’s stories, they started passing their own ideas through the mail—wild tales of aliens and time warps, crossing the country in a grand orchestration: the written conversations of strangers. Like social media, but without all the insanity of the instantaneous. The readers became the critics, the reviewers, the writers: through their own offshoots of protest, many found that channeling their ideas into small, serialized, pocket-sized booklets, was the real wave of their future.

The form held through the ranks of cultural otherness: science fiction, rock and roll, punk, horror—the zine had the capacity for them all. What follows is a list of zine titles that, when read in the sole context of each other, exemplifies the bombastic nature of this particular otherness better than second-hand description: The Witch and the Chameleon, Who Put the Bomp, Slug and Lettuce, Bikini Kill, Journal of Frankenstein, To Hell with Poverty, Giant Robot, Search and Destroy, ROCKRGRL.

Part of the zine’s appeal (apart from that humble defiance): is its flexibility as well as its feasibility. It’s doable. For all the voices of the unheard, the zine can sing. While it’s initial intent may have had more to do with the exuberance of fandom than subversion of the mainstream, it became and remains one of the more democratic art forms. With it, we can skip the Sistine and pass around the stories of our cave walls.

But like every Cinderella story that continues beyond the Happily Ever After, the zine fell from grace. During the 1990s, the form was co-opted by large companies, marketed and sold, commodifying the do-it-yourself culture that had resisted such commodification. And so the zine lay low for a long while, a Van-Winkle dormancy, sleeping through Brittany Spears, the rise of the Internet, and the world domination of Coffee Culture. Upon waking, the zine found that the world was again in desperate need of its form.

Objects are larger than they appear.

(Take this, and keep it in your pocket: in 1975, two women—Janice Bogstad and Jeanne Gomoll—created Janus, a feminist science fiction zine, in Madison, Wisconsin. The zine was closely associated with WisCon, the oldest (and some say best) feminist science fiction convention in the world. The magazine won numerous Hugo awards, and printed such now-big-namers as Octavia Butler, Suzette Haden Elgin, and Ursula K. Le Guin. Point being: we’re in good company).